We’re coming off 2+ years of Covid 19 and a challenging election which resulted in the first Black/Asian woman as Vice President. During this time we decided to focus on something positive by celebrating women whose deeds impacted the world. We put out an international call and accepted submissions that feature women known to the general public, as well as others who have not yet gotten their due. On the subsequent pages, you’ll see a few women portrayed by multiple artists, including, not surprisingly, Michelle Obama and Ruth Bader Ginsburg. We hope you see women you are also inspired by and are introduced to others you are excited to learn about.

The Year of the Woman was a popular label for 1992, after the election resulted in 5 female US Senators. The term has also been used to refer to the 2018 House elections, in which a record 103 women were elected. Now, in 2022, 125 women represent 27.9% of the total 117th US House of Representatives.

In 2016, Hillary Clinton spoke of the glass ceiling, a metaphor which refers to an invisible barrier that prevents women and minorities from moving forward. In 2020, Kamala Harris broke that ceiling hard and shattered glass was heard around the world when she made history as the first woman and woman of color as Vice President.

So many women in government stood up to the powers that be to help save our democracy. So many women’s accomplishments in every field haven’t gotten the same attention that men have - women making the world better, women in music and dance, sports and the written word, tv, radio, cinema and theatre, science and math, and the visual arts  Straight, gay, trans, Black, Brown, Asian, Indigenous, White, etc– women have not been fairly represented. After all, history was written by men.

This exhibition and catalog attempts to set the record straight and rewrite history to include herstory. We want to honor all inspiring women (special shout out to BIPOC)— contemporary, as well as throughout history, and national, as well as international women. We want to tell their stories visually and through text.
See it on www.artsy.net/drawing-rooms 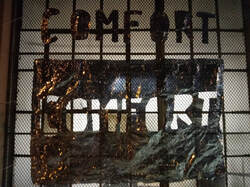 View Images of the Exhibition on Facebook HerE or see below

The third wave of artists from New Jersey and locations across the country have put out their prayers flags at their homes, apartment buildings and college campuses, in woods and public parks. While many are isolated, and travel is limited by coronavirus, these artists have found a way to reach out to their local community and also create an interconnected community with each other through the prayer flag project. The collected images of their works on-site, and their thoughts and responses to life during the pandemic, are brought together in Drawing Rooms’ presentation, here and in an online and in a print book.

Ten Artists’ Prayer Flags at the Topps Building for JCAST 2020

While our Drawing Rooms indoor gallery may be closed during the pandemic, well that wouldn’t stop us from finding other ways to show art that can be seen in person– outdoors! Come to the Topps Building 926 Newark Ave., outside Drawing Rooms gallery, to see over 70 feet of Prayer Flag displays down Newark Ave. Collaborations and shared concepts and materials between the group of ten women, which includes two sets of sisters, make for a unified front, full of brightness, movement and sound.
Jill Scipione’s crocheted dots create a shimmering field of color and a tinkling of bells when the wind blows, and they are framed and complemented by Anne Trauben’s pipe cleaner wrapped eye votives and laminated letter drawings. Eileen Ferara’s painted canvas strips  and Lucy and Liz Rovetto’s compilation of fabrics, plastics and knitted forms, both stack totemic imagery: gloves, hands and hearts and fire. Katie Niewodowski’s drawings sparkle with tiny outlined monochrome shapes, like the cds that form the base for Kate Dodds serpentine setting of eyes. Mollie Thonneson flags continue both the thematic symbol of eyes and the prevalent colors of magenta, blue and yellow, that runs through many of the works including Caridad Kennedey’s flags made of school folders and red ribbons. Nanette Reynolds Beachner adds green to this color pattern, creating a glittering multi-layered set of flags featuring celebratory sounds cut into reflective foils trimmed with pom poms and bells, that also jingles in the wind. A giant burst of flower petals, a collaborative banner by sisters Julie and Anne Trauben, finishes or starts the set of flags, depending on which way you are traveling.

In this, our second collection, we continue to receive images and stories from artists in the NY/NJ area, as well as across the country. Here’s some of the flags we received that you will see in the following pages:
A set of Jersey City flags used only colored paper and scotch tape to create a burst of light. Crocheted flowers hang from windows and a rooftop in Bayonne, NJ. A flag with Korean lettering made of fabric from the artist’s father’s office shirts hangs on an Alabama front porch. Relief prints of a snake on a staff, and black and red crosses, are posted on fencing in a field in Las Cruces, New Mexico. Ethereal painted silk flags floating over a waterway in western Massachusetts. A cut, collaged paper flag covers a fire escape in Brooklyn. The rising sun flies from the balcony of a house in West Virginia. A calligraphic message of hope is spread across library windows in Croton-on-Hudson, NY.
​
The artists’ stories and messages shared with us to us are vital to the project as well. One artist tells of her personal experience with the virus, another cared for her mother, and one artist gathered a dozen friends to create a collaborative project. The sense of community becomes realized and visible.

View Volume Two Online Catalog HERE
Purchase Volume Two Print Catalog HERE ​
PRAYERS FOR THE PANDEMIC
PART 1 OF DRAWING ROOMS’ NATIONWIDE PUBLIC ARTS PROJECT 5/20
Prayers for the Pandemic, beginning 5/15/20 is an ongoing worldwide public art project by Drawing Rooms, Jersey City, NJ.
Artists chosen to be in Group One total 34. As of July, 33 individual artists and one collaborative group of 13 were chosen.
​The exhibition asks artists to create prayer flags, drawing inspiration from Tibetan prayer flags used to bless the surrounding area in which they are placed.

While we are all living through the coronavirus pandemic and the fight to create racial justice and equality, we feel we could all use positive karma and blessings. Artists from NY to Florida to California are flying flags in their communities as part of this exhibit.
​
An online exhibit, online and print catalogs are being published. Drawing Rooms hopes Prayers for the Pandemic; Prayers for Progress will become the exhibit that reopens our gallery.

Volume One catalog came out on May 25th and includes the first group of 34 artists’ works. This catalog features flags flying from California to New York City to Florida– flags hanging on the sides of buildings, in the windows of suburban homes and storefronts, on a wooden country fence and a barbed wire ranch enclosure, in medical labs, strung between trees in parks, over city streets and everywhere that we are sheltering through this time.