Join us Thursday 9/29/22, 5-8p for the Opening Reception in our New Gallery Space

Drawing Rooms’ newly expanded space at Topps presents our first major exhibition since the pandemic shut our gallery in March 2020, with a sprawling revue of paintings, assemblages, drawings and prints by one of New Jersey’s hardest working art-couples.

Ani Rosskam and Bill Leech: A Wonderful World, 9/29/22-1/13/23, presents selections from several recent series of works by each artist. In side-by-side studios in their Roosevelt, NJ house, which overflows with artwork and artifacts, Ani Rosskam and Bill Leech have been creating their own realities for decades. Although their work is very different from one another's, their ideas and styles are sometimes influenced by each other due to proximity and shared sensibilities. The exhibit also brings aspects of Ani and Bill’s home/studio right into Drawing Rooms, including some of the popular cultural and uniquely personal things they keep beside them. 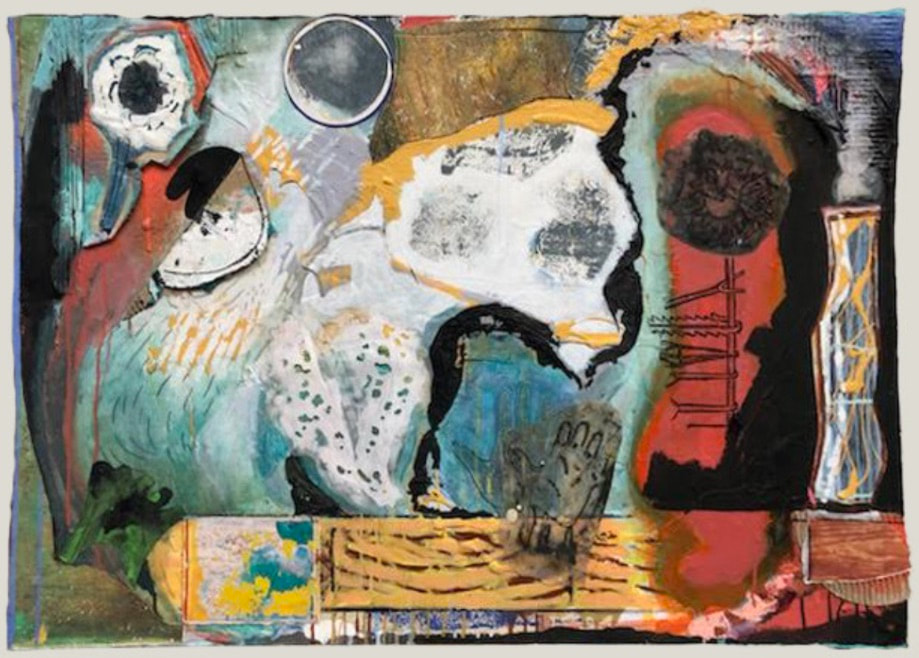 Ani Rosskam
According to Bill Leech, growing up in the wide open spaces of the Midwest played a part in developing his overall sense of composition, color and light. In both his Imaginary Landscape series of paintings and in his recent abstract works, Bill’s images are characterized by misty areas of colors that are superimposed with floating forms, often stenciled or perhaps ‘borrowed’ from other sources. In the landscape works, the objects, people, pets, plants, are pasted into their world in a perspective that seems to recall both Early American naive painting and the ‘floating perspective’ of ancient Chinese landscapes. The figures and objects are often surrounded or isolated by a paint-aura and exist like symbols, together on the same plane, but not interacting. This sense of space is continued in the abstract paintings, where richly colored orbs or black linear forms or curving shapes made from cut-out stencils are lined up across the canvas, hanging in the atmosphere, a lexicon of often-fragmentary pictographs that, like the landscapes, we must decipher for ourselves. A set of new pencil drawings and prints from Bill’s Postcards from the Edge series further expand his sense of narrative.
The convergence of objects and ideas that are intrinsic to the art of collage underlie all of Ani Rosskam’s works. Ani says she strives for a “balance between the familiar and the unexplored by combining elements together in some harmonious way.” Her active, tightly structured compositions, with their deep glowing hues of reds, blues, tans and gold, are places where anything can happen–  and indeed seems to be happening, even as we watch. Several large and medium scale constructions are presented, along with a series of circle-in-a-square works built from thickly layered cardboard that recall ancient Greek or Roman plates. Pages from Ani’s Hecky Book, a visual diary the artist started after her mother’s death, are also included in a portfolio for visitors to page through. In these arresting, vivid, stream-of-consciousness visions, Ani has found a way of piecing together life experiences and creating a visual poem dedicated to her mother’s memory.

Bill Leech grew up in a small town in rural Kansas and attended the Kansas City Art Institute and Skowhegan School of Painting and Sculpture. Since around 2008, he’s become more focused on abstraction. Bill has been in group shows, as well as solo and two-person shows, across the country. Galleries and museum exhibitions include Accola Griefen Gallery, Ben Shahn Galleries, William Paterson University, Becker Gallery, New Jersey State Museum, Hunterdon Museum of Art and The Painting Center.

Ani Rosskam was born in Puerto Rico, and came to Roosevelt NJ, with her parents, both pioneer documentary photographers, at the urging of their friend, artist Ben Shahn. The town was built for a community of friends and neighbors– artists, writers, musicians and photographers, who moved there to be part of the agro-industrial project. Ani received her BA from the Tyler School of Art in Philadelphia. She also attended the Tanglewood Program in Massachusetts and Skowhegan School in Maine. Ani has had one person shows, been included in museum exhibitions, and has shown her work across the US, including the NJ State Museum, William Paterson University, and Bridgette Mayer Gallery.

ABOUT THE RECEPTION
Please join us for a reception for the artists on Thursday, 9/29/22, 5-8p. Stop by before or after the JCAST kickoff party at Mana from 6-9p! Masks required indoors. Wine will be served at Drawing Rooms’ Outdoor Cafe.